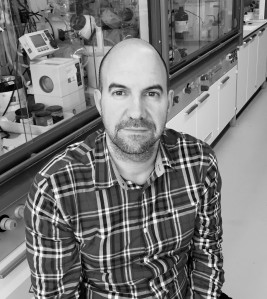 Félix Freire received his B.S. (2000), M.S. (2002), and Ph.D. degrees (2005) from the University of Santiago de Compostela in the group of Prof. Ricardo Riguera and Prof. Emilio Quiñoá with a FPU fellowship (Spanish Government). His Ph.D. was focused on the study of the absolute configuration of diols and triols by using 1H NMR. During his Ph.D. he spent 4 months at Prof. Jesús Jiménez Barbero (CIB-CSIC, Madrid)  and Dr. Juan Luis Asensio group to study the peptide folding by NMR. Once completed his phD, he performed a postdoctoral stage in the same group to continuously working on peptide folding and protein/protein interactions by using NMR. In 2006, he moved to USA with a postdoctoral FULBRIGHT fellowship to work under the supervision of Prof. Samuel H. Gellman in Foldamers. His research was focused on the design, synthesis and structural studies of parallel β-sheets that fold in water. In 2010, he obtained the prestigious Ramón y Cajal fellowship from the Spanish Government, to start his own research at the Center for Research in Biological Chemistry and Molecular Materials (CIQUS) in the University of Santiago de Compostela, where he still works as an associate professor.  His research interests include polymer and supramolecular chemistry, chirality and nanostructures. In 2012 he got the SUSCHEM award due to his research in chiral nanostructutres (JACS 2012, 134, 19374-19383). His research was highlighted in the cover of journals such as JACS, Angewandte or Chemical Science.

My Ph.D. and postdoctoral activities were focused on the structural study of small or medium size molecules. These structural studies allowed me to develop different models to determine the absolute configuration of polyfunctional compounds by NMR,  and also study the folding of parallel beta sheets in water.

Nowadays, my research is focused on the helical polymers field. I am interested in dynamic helical polymers because their helical sense and scaffold can be tuned once they have been prepared. Thus, a rational design of the monomer will allow us to create polymers that can act as sensors of different external stimuli changing their helical sense or structure in the presence/absence of these stimuli. Moreover, I am also interested in the introduction of this dynamic macroscopic chirality in nanostructures.